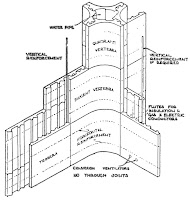 Knitlock requires no skill to use, is cheap to manufacture and offers any builder a flexible range of structure with just six specifications. Just six. Eight if you want roof tiles.

The Knitlock building system supplies the inner and outer wall
structure, it can be laid by unskilled labour on any properly
footed base.

A prototype core house of twenty one feet square, built on earth footings in 1917 remains the hearth of the house grown around it.

Knitlock has potential as emergency housing it is easy to transport and easy to make onsite where appropriate
All I need to do is make some. Prototype moulds are being costed now.
Someone who's Flickr pictures of the Capitol interested me, happened to be from RRR's architecture show.
This week they had Jeff Turnbull discussing Griffin. My name was mentioned in connection with Knitlock.
So my cat is out of the bag!
Posted by Unknown at 4:57 PM